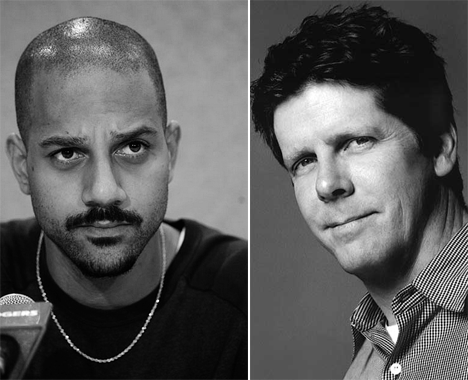 Albert Hughes (and briefly cinematographer Peter Deming) discuss the filmmaking process and approach to learning, set design, camera technique, and in Part II  on Hollywood and what it means to love the craft so much that it causes utter depression. Don’t miss that bit of lengthy discussion because for any serious filmmaker, it’s bound to hit home.

In what I found to be one of the most illuminating discussions about the filmmaking process I’ve heard in a while, Soderbergh touches upon low budget filmmaking. Extensively covered points are about working with non-actors, shooting digital, and process of directing such a low budget film.

What drove Gus Van Sant to remake Psycho? What is the reason? Personally speaking, as someone who is fascinated with the cinematic language I found Van Sant’s reason to be a worthy and justifiable one on the grounds of a pure experiment to better understand this art form.

The man who is known for spending multiple sessions actually recording his commentary tracks returns with more well prepared information on how he threw away all of his trademark film technique out for a much looser style seen in The Mist. Hear it all here.

The editor who was John McTiernan‘s perfect collaborator for Die Hard because he was happy to “cut on movement” when any other film editor would deem you as a filmmaker who doesn’t know what he’s doing, sits down to divulge some information on the process of editing. What is the process on a day-to-day basis for an editor? What is important to maintain a rhythm of a scene? How does temp music help an editor when he cuts a scene? What is an editor’s responsibility? These questions, among others will be answered by this generally unknown editor who was behind some very interesting action films of the 90’s.

One of the most informative commentators is Steven Soderbergh, whose quote I have up on the right hand side of the main page about what he thinks about commentaries as a resource for any wannabe filmmakers. No stranger to bringing on guests to sit in with him as he discusses the films at hand, he is joined by another filmmaker – Neil LaBute – who acts as a sort of moderator as he asks Soderbergh various questions about the filmmaking process. The range of discussion goes anywhere from rehearsals to using sound. Listen to it all below.

For those who have been visiting the site and learning through the commentaries but want to take it a step further with their autodidacticism as it pertains to film education here’s your chance to join a reading group that a few of us have established.

So far, we have outlined the reading material for the first three months. A indicates a past event; book has been read and discussed.

Our aim for the next three months (we are two weeks in) is to delve deep into discussing film Style/Form/Structure. Our hopes are to reverse engineer how a film is put together. Whether it is a comedy, arthouse/Sundance indie, or film noir – we will aim to break down how style dictates the film’s form or vice versa. How are films structured? The first two books; Film Art, and The Visual Story delve deep into these concepts so we recommend you start with those books.

If you are near a university or a local library you should be able to find most of the readings outlined above. Some books you can find online through a site like Archive.org in PDF form. All in all, the dedication is up to you. Anyone is truly free to get in on the discussions in the comments even without reading the given books. But we do aim in having dedicated readers participating so that we can all discuss the concepts and ideas we learn in these books.

We will read the books in chronological order of the syllabus. About two weeks: one week to read, one week to discuss will be applied to each book. Certain visual examples will be illustrated as well. A separate section has been created – Film Reading Group, much like the Commentaries section – where you will be able to track down the individual posts (and film reading progress) of the given book/week and read all the discussions anyone involved will have – along with whatever examples, illustrations that will be posted up in the main post.

So far there are three of us actively participating and since making the post there have been a handful of interested people who have approached us. The goal is to grow in our understanding and grasping of film technique, cinematic language and cinema as a whole. In doing so, we also aim to create a network of serious film individuals and filmmakers who would wish to collaborate down the line in a sort of a distanced filmmaking way, utilizing social media or simply internet to collaborate on projects.

A separate post for Film Art will be created in order for everyone to get in on the discussion.

Without further ado, below is an Abstract written up for The Visual Story by a member of the Film Reading Group, Kojève.

This is mostly a factual book. I’ll list out some of the facts in another post. For now I’ll remain pretty broad just for the sake of thinking about the larger meaning of the book in our project.

A film’s visuals are structured. The people responsible for the film should approach their domain the same way a Screenwriter approaches a Story Structure. Our point here is to “understand how visual structure allows you to communicate moods and emotions.” So here we understand an important part of the author’s conception of visuals: the film’s Visual Structure is a communicative act, it is the act of communicating meaning/emotion/understanding by (1) controlling the attention of the audience and (2) varying the visual intensity of their cinematic experience (via affinity/contrast) across scenes, sequences, and film. — If you really read the book it is incredible that despite how complex a visual system really is, ultimately this is all a film’s visuals are up to. [Editing in a note. This is all a film’s visuals are up to within the Visual Structure; I take it as obvious that there are all kinds of other things a film is up to aesthetically regarding things like beauty, editing around performances, etc.]

What I take to be a key point is that we should “find the critical relationship between story structure and visual structure” through pictures. But he says of pictures that they all involve Story, Visuals, and Sound to encode meaning/emotion. As we get into Sound, I like the idea of thinking of these three Story/Visual/Sonic Structures as interrelated acts which are both holistic yet comprise their own whole or Formal System. [Here I think it would be interesting to think of how a film’s visuals alone might comprise locutionary/illocutionary/perlocutionary acts but that’s off-topic.]

OK so now we think of Visual Structure as something self-enclosed and unified in Form and Style, as well as interacting dynamically with the other structures. If we consider the actor — an Actor is a performance, and a visual object on screen so it’s our job to be able to balance these two things in our mind at the same time while shooting. We may wish to focus the audience’s Point of Attention on the performance for a long swaths of uninterrupted time so as to allow the literary/theatrical quality of the film function as the creation of meaning/emotion (think Olivier’s Richard III), or we may take some effort to create a visual structure which does a lot of that work while building that performance into the structure (think Tony Scott).

How terribly obvious all this writing is. So OK, broadly: Visual Structure as System creates its own Visual Patterns by establishing meaning — patterned linking of a visual cue and a meaning. What visual components of a shot relate to meaning and interpretation? (1) Space, (2) Line, (3) Shape, (4) Tone, (5) Color, (6) Movement, (7) Rhythm. So consider the Sonic-Emotional link created through structured patterns in Jaws & Psycho. Visuals have the same function.

Visual Structure exists through visual progression. Visual progression is the creation of patterns through the abstract determination of how we are to approach varying the level of intensity (same as a story) via the concrete determination of specific points of affinity and contrast across scenes/sequences/film of these 7 visual components, by mapping this stuff out in combination with story structure. All of this applies to remembering how to work on these smaller more precise as well as larger aspects of the structure while keeping the whole complex mereology in mind. In practical production, all of this is very difficult.

The final interesting point. He makes a larger logical claim akin really to something like the Laffer curve — there exists a point between no intensity, which is all too dull, and too much intensity, so we might take this as a 0 to 100 mathematical function and make a relative visual graph that spans our entire scene/sequence/film.

In regards to commentaries – I am planning to upload more in the next few days, apologies for the delay.

The man behind the camera of the classic Shawshank Redemption illuminates us noobs on the craft of filmmaking. In the first part he talks about such topics as directing, narration, sound design, set design, camera technique amongst other topics which escape me as of this moment. Oh, and did you ever wonder about who Allen Greene was and why Darabont dedicated Shawshank Redemption to him? Listen below and find out.

In the second part of this rare track, Ridley brings you the goods one more time on filming inside cars, Washington, D.C., differences between anamorphic widescreen and Super 35, continuity logistics, working with cameramen, having a vision, editing process, directing process, rehearsal with actors.

If you missed it, watch Part I below

A rare commentary track from Ridley Scott in which the man gives his usual in depth and informative discussion on the craft of filmmaking. He covers such topics as casting, directing, camera operating, editing. I’m never disappointed in his tracks as they’re filled with quite a bit of information you’d always like to hear about if you’re making films yourself or are involved in any aspect of the craft.